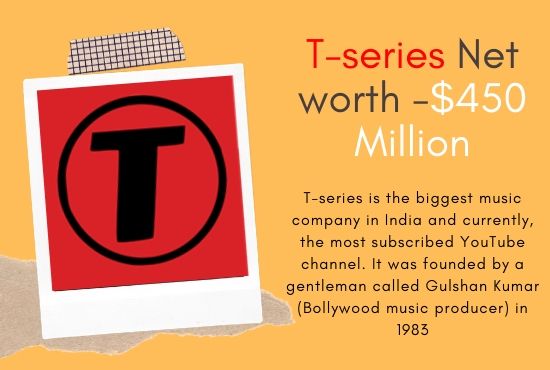 T-series is the biggest music company in India and currently, the most subscribed YouTube channel. It was founded by a gentleman called Gulshan Kumar (Bollywood music producer) in 1983 and later on Bushan Kumar son of Gulshan took over T-Series music label. As of 2019, T series net worth is estimated to be $450 million.

How T-series actually came into Existence

Let me give you the back story of T-series and how it actually became the most popular music company in India.

Gulshan Kumar is the man who introduces T series the biggest music producer in India.  He was born on May 5, 1956, in New Delhi the capital city of India. Gulshan’s dad was running fruit Juice Company and from a very young age, he helps his dad with his small business.

Later on, the family acquired store which sold music cassette and tape. The Young Gulshan took care of the music shop and started selling the pirated version of new Bollywood songs.

He made a very decent amount of profit from his business.  To change the direction of his firm and take it to the genuine business line, he invested his acquired profit to a new idea.

He understood the market of devotional songs has high demand, so he hired local singer, recorded the song and took them to market.

This step was a tremendous success and boosted his business economic.

As his profit value increase, Gulshan took his next major step to venture into real Bollywood. In 1983 T-series release their first-ever original music and it was hugely profitable.

During January to July 2018, T-series has earned an income of $100 Million only from their YouTube videos.

The channel has 120 million subscribers as of 2019 and gained about 90,944,026,073 views so far. Every Single day the music company uploads more than 15 videos to their channel and the subscriber are growing exponentially. Total upload videos generate over 3 billion page views for the last 30 days. Therefore the company is earning estimate revenue more than $834k -$13.4million solely from YouTube ads that run on the videos.

Youtuber earn about $2-$5 per 1000 views from YouTube partnered program at the share ratio of 60-40. US, UK, CPC (cost per click) is higher than other Asian countries, i.e. earning fluctuates as per location of traffic source, types of ads and other factors.

Google starts to serve ads once your YouTube channel surpasses 1000 subscriber count and 4000 hour watch time within the 12 month period.

Also Read: HOW MUCH MONEY MUMBIKER NIKHIL MAKES ON YOUTUBE – NET WORTH

In addition to that, every YouTuber earn more money from YouTube Red Program, where viewer pays a monthly fee to watch ads free videos of their favourite YouTube channel.