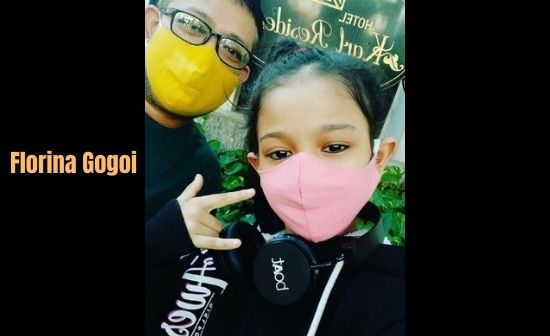 Florina Gogoi aka Flotus is one of the sensational contestants in super dancer chapter 4 hosted by Shilpa Shetty, Geeta Kapoor, and Anurag Basu. Florina amazed all three judges with her super cool moves wearing a blue long t-shirt of her dad. She was born on 24 September 2014 in Jorhat, urban city of Assam and her age is 6 years old as of now.

As we research more about Flotus we knew that she was always interested in dancing. Likewise, she is a Moon Walk Dance Academy Student operated by Dancer/Choreographer Santos Rabidas.

Many viewers are still confused why Florina Gogoi’s voice is different or she making it by herself. There is no definite reason for her unique voice tone. People do believe that Flotus might be the winner of super dancer 4 if Prithviraj Kongari and Sanchit Chanana were eliminated during super dancer top 5 selections.

Both of her parents are from the small village of Kendaguri, Assam. Her father’s name is Debajyoti Gogoi, who works in a small private firm and her mother’s name is Jyotimoni (housewife).

A cute little girl wearing a blue long t-shirt of her father came into super dancer chapter 4 stage and she started dancing on “Mere Naseeb Mein” song by Lata Mangeshkar, instantly, she was asked to introduce herself. Judge Anurag Basu asks her what is the meaning of her name Florina and she said “it’s a flower”. The funniest part about her audition was when she was questioned “how far is Jorhat from here? She said 2 ltr. All three judges couldn’t stop their laugh.

At last, she battles with her guru Santos Rabidas on the super dance stage.

Presently, she is dancing along with the most talented choreographer Tushar Shetty.

Also Check out: How Much Money Ashish Chanchlani Makes on YouTube- Net worth

If you are a frequent viewer of Super Dance Chapter 4, you might know that Florina has celebrated her birthday on 24th September 2021. Every moment was capture in Prithviraj’s phone that was later on uploaded on YouTube. During her birthday celebration way, she offered cake to Tushar sir and Tushar sir pointing towards her mother was so cute.

How old is Florina Gogoi?

If I have left out any information about Florina Gogoi please do let us know!