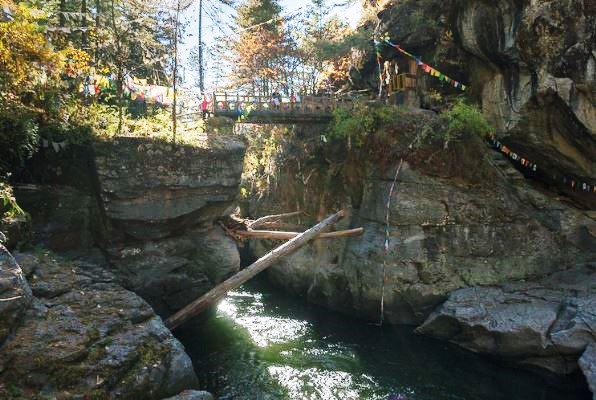 It happens during the late 15th century when the great renowned treasure revealer Terton  Pema Lingpa revealed the sacred hidden treasure of Guru Rinpoche from the current lake, mebar tsho.

How the lake got its name Mebar Tsho!

Terton has a vision about the hidden treasure within the lake but the people of Tang and local leaders didn’t trust his claims.

To prove his claims he held a burning butter lamp and jumped into the lake, after some hours he came with a statue of Buddha and sacred books of Guru Rinpoche, with the butter lamp held in his hand still burning.

Note:  Terton Pemalingpa is believed to be the true incarnation of Guru Padmasambhava and the renowned treasurer of Bhutan.

He has discovered the various sacred hidden treasure of Guru Rinpoche.

And another well-known story about mebar tsho is of a farmer who went searching for his cows and saw beautiful temples, monks chanting mantras where the lake was.

Another well-known story on mebar tsho

He went inside the temple and was overwhelmed by the magnificent sereneness of a temple.

After a while, he realized he has stayed more hours, and he went home to share about the temple.

To his surprise, he had been missing for almost 21 days and his family has finished doing his funeral.

Villagers and his own family were surprised to see him alive, they thought that he might have drowned in the lake since his hats were floating in the lake.

In Bhutan, there is several sacred pilgrimage site and mebar Tsho is also considered one of them.

Most Bhutanese visit to offer butter lamp, milk and hoist prayer for all sentient beings.

What is Rutracker and is it Legal?

Takstang Monastery-Why you should visit once on your Bhutan Trip?