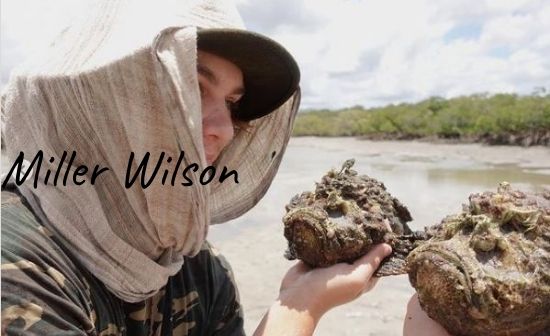 If you strive to be a YouTube star, Australia is a great place to live. Exhibit A: Miller Wilson.

The Aussie has made a gigantic splash on the platform for years, backed by a Steve “Crocodile Hunter” Irwin-Esque zest for life and passion for wildlife, especially the unique animals found in his native land.

Miller Wilson’s videos are entertaining and fascinating showcases of everything from king cobras and other venomous Australian snakes to primitive survival techniques.

But who’s the man behind all the action?

Here’s a close look at everything you need to know about Miller Wilson.

Where does Miller Wilson Live and How Old Is He?

Miller Wilson (Age 19) is from Queensland, Australia, one of the country’s states that covers a good chunk of its northeastern land and sits on a 7,000-kilometer coastline. It’s close to the world’s largest system of coral reefs, the Great Barrier Reef.

Wilson was born on January 2, 2003, making him 19 years old, and has a sister named Persia within his family.

He reportedly lives with his sister and father in a treehouse within the Blackall Range rainforests.

Who is Miller Wilson Dating?

Despite sharing his adventures with the world, Wilson is a bit more guarded about his personal life.

Multiple sources find that he is not currently in a relationship and there is no extensive record of his dating history.

A few sources indicate that he has had at least one serious relationship in the past. He has no children.

What is Miller Wilson Known For?

His videos on YouTube have been viewed a whopping 151.6 million times over seven years.

Miller has documented his outdoor travels across the continent over the past five years on his page, which covers wildlife, outdoor survival recommendations, fishing, bow fishing, and spearfishing.

He’s also known for interacting with some of the most dangerous wildlife of Australia, from a bird-eating spider to the stonefish, the world’s most venomous fish.

He has a particular passion for fishing, with many videos providing fishing technique recommendations and unique species he has caught during his travels.

Likewise, Wilson garnered massive attention at 12 years old when he shared a video of himself petting two king cobra snakes.

In the same year, Wilson posted a video in which he assisted a stingray in giving birth to 12 babies. Stingrays have a deadly barb on their tails.

when he was 12, Wilson was featured on the NBC reality series “Little Big Shots.”

What is Miller Wilson’s Net Worth?

Wilson has made a successful living from his videos. His net worth is estimated at $1.5 million as of February 2022. That figure makes him one of the richest YouTube stars in the world.

Wilson’s website makes his beliefs and mission clear: “The Future is Nature.” Inspired by Irwin and legendary natural historian David Attenborough, Wilson raises money through his “Future is Nature” banner for projects that protect nature and the environment.

Also, the donations go to a range of conservation programs and related activities in Australia and around the globe, supporting both threatened habitats and critically endangered wildlife.

Miller Has Some Cool Merch

Wilson’s website also hosts a shop offering must-haves for fans of all his favourite activities, including fishing, survival, and wildlife conservation.

Moreover, T-shirts and hoodies have images of Wilson fishing, one camouflage one emblazoned with his name and a snake, and there are even hats and stickers.

Ever tried surviving 24 hours in an uninhabited Australian rainforest without food, water, and shelter? How about kayaking on a Sunshine Coast island and surviving off mud crabs as you encounter venomous snakes?

His survival-themed videos are both inspiring in the same way somewhat terrifying. In one video set in a rainforest, Wilson swims with a green tree snake, catches Australian bass, rescues a turtle, locates two coastal-carpet pythons, and then cooks fish under a waterfall.

Miller Wilson is a Teacher

That’s right; you can take a course from Miller on craftsy.com. The kid-friendly course covers easy outdoor survival tips or suggestions for outdoor adventure. A+!